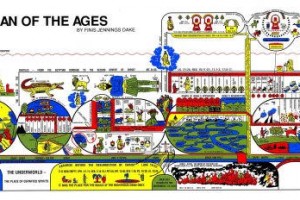 Dispensationalism is one of the most widely held systems of theology among Bible believers in the United States.1 With this in mind, a study of dispensationalism is certainly called for by both the adherents and detractors of this system.

What is a dispensation? According to Finis Jennings Dake: “It refers to a moral or probationary period in angelic or human history during which God dealt with angels or human beings according to a particular test or responsibility, under which each was to remain true to his trust of administering affairs for God under His direction.”2

The English word dispensation is an Anglicized form of the Latin dispensation, which the Vulgate uses to translate the Greek word. Three principle ideas are connected to the meaning of this English word: 1) The action of dealing out or distributing; 2) the action of administering, ordering, or managing; the system by which things are administered; and 3) the action of dispensing with some requirement.3 For our purposes the word is defined by the same dictionary as “a stage in a progressive revelation, expressly adapted to the needs of a particular nation or period of time… Also, the age or period during which a system has prevailed.”

For a Biblical understanding of the word dispensation a search of the Greek is the most meaningful. The Greek word oikonomia means an administration, a stewardship of a household or estate, a dispensation. The word dispensation comes from two Greek words, oikos, a house and nomos, a law. As applied to the various ages, it means a moral or probationary period in human and angelic history.4

History of DISPENSATIONALISM In America

The period from the end of the Civil War to the opening on the twentieth century was one of development and change in America. In such an environment new social theories and solutions which were being introduced began to take root and grow. This gave rise to the Bible conference movement, and it was out of this movement that a unique method of interpretation known as dispensationalism was birthed.5

John Nelson Darby  (1800-1882) began as a lawyer, but after two years turned to ministry in the Church of England. During this time (1825) Darby suffered a leg injury which required a period of convalescence. During this time Darby came to two conclusions: 1) That his position was in heaven with Christ; and 2) That he should abandon self-efforts to fulfill the law as a means of salvation; Darby however, was unable to reconcile the earthly promises made to the nation of Israel with these conclusions and seeing himself as a N.T. believer. As a solution to this problem, Darby began to compartmentalize the Scriptures, and to suggest that the Church and Israel where two dissociated groups of people. This was the beginning of dispensationalism as we know it today.8 Darby came to understand that a dispensation is an economy, any order of things that God has arranged on earth. The primary characteristics of a dispensation include government administration, responsibility, and revelation to fulfill both. Secondary characteristics include testing, failure, and judgment. When a group fails the test to exercise their responsibility given them by God, judgment falls and ends the dispensation.9

In time, some of the leaders of this movement began to question the pretribulation rapture teaching. It was in the winter conference of 1900-1901 that two opposing camps where formed. It was during this time that dispensationalists redoubled their efforts.  Two men who lead the fight where A. C. Gaebelein and C. I. Scofield. These leaders were quite successful in their defense of dispensationalism. In fact Kraus says “ The dispensationalists had won the day so completely that for the next fifty years friend and foe alike largely identified dispensationalism with premillennialism.11

After World War I many dispensational Bible colleges formed. Led by Dallas Theological Seminary (1924), these schools have served to reinforce dispensationalism by seeking to fill the void of scholarly support for the movement. In more recent times Finis J. Dake (1902-1987 Independent) through books and “The Plan of the Ages” Bible chart,13 along with John G. Hall (Assembly of God) writings and his “The Eternal Program Of God” Bible chart14 have continued to make monumental contributions to Bible understanding through dispensational studies. Today, dispensationalism continues to be a dominate force in the twentieth-century.15

Dispensational theology is a system that embodies three essential concepts: 1) The church is distinct from Israel, “a man who fails to distinguish Israel and the Church will inevitably not hold to dispensational distinctions;”16 2) God’s overall purpose is to bring glory to Himself;17 and 3) “A consistently literal principle of interpretation.” This principle “is at the heart of dispensational eschatology.”18

The church is seen to be different from Israel for two reasons. 1) Its character: Israel was a nation of people all Jews. The church is a group of believing Jews and Gentiles baptized into the body of Christ. 2) Time: The church began after the resurrection of Jesus Christ, whereas Israel was before. This mystery of the church was not revealed to Israel. God’s overall purpose of bringing glory to Himself is seen in each dispensation as God reveals His plan to each group of people.20

Throughout the history of various modern times dispensational scholars, the schemes have been many and varied. A survey of the basic schemes would be as follows:

Today Scofield’s scheme would be the most prevalent.

Scofield taught21 the Scriptures divide time into seven unequal periods, usually called dispensations (Ephesians 3:2). These periods are marked in Scripture by a change in God’s method of dealing with mankind, or a portion of mankind, in the area of sin, and man’s responsibility. The dispensations may be regarded as a test of the natural man, and each ends in judgment-marking his failure in each dispensation.

Five of these dispensations, or periods of time, have been fulfilled; we are living in the sixth, probably toward its

close, and have before us the seventh, and the last-the millennium. Scofield’s Scheme is as follows:

1) Man Innocent. The Dispensation of Innocence. From the creation of Adam to the expulsion from Eden. (Genesis 2:15-3:21)

2) Man under Conscience. The Dispensation of Conscience. From the fall of Adam to the flood of Noah. (Genesis 3:22-8:14)

3) Man in Authority over the Earth. The Dispensation of Human Government. From the flood of Noah to the tower of Babel. (Genesis 8:15-11:32)

4) Man under Promise. The Dispensation of Promise. From the tower of Babel to the exodus out of Egyptian bondage. (Genesis 12:1-Exodus 12:37)

5) Man under Law. The Dispensation of Law. From the exodus out of Egypt to the coming of Jesus Christ preaching the Kingdom of God. (Exodus 12:38-Matthew 2:23)

7) Man under the Personal Reign of Christ. The Dispensation of the Millennium. From the second coming of Christ to the last rebellion of Satan on Earth. (Revelation 19:11-20:15)

8 Kimbro, The Gospel According to Dispensationalism, page 11.

15 Kimbro, The Gospel According to Dispensationalism, page 17.

Three different sizes of the Dake Plan of the Ages chart available!